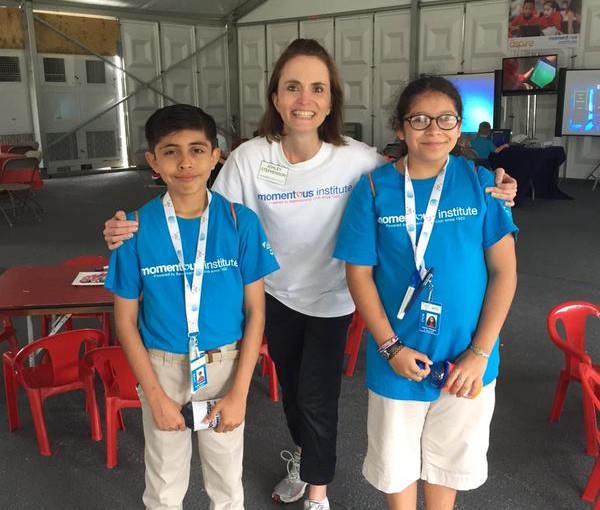 Kids’ Opinions of the KidsZone by Pablo and Jizelle

The other day we told you what the adults say about the KidsZone. We thought it would be nice to hear what actual kids say about it, so we stopped by on Friday to interview a few of the kids playing in there.

The first girl we interviewed was Anabella, a girl who had been in the KidsZone for about an hour. She said was there because she wanted to have some fun.  She couldn’t decide on her favorite thing at the KidsZone but said she liked the bounce houses the most because she got exercise. She played Subway Surfers on the tablets and liked them and he only art activity she has done so far is the drawing contest. She said she has had a fun time at the KidsZone and that she recommends the KidsZone to other kids because it is fun.

The other girl we interviewed was Kaylie. She was there to take a break from the sun and said she is really enjoying the KidsZone. She hasn’t played on the tablets yet and like Anabella she has only done the drawing contest. She really likes the bounce houses and said that is her favorite thing. Her recommendation for other kids is that when you are in the sun it is a good time to come cool off. Both the girls said they might come back tomorrow, since there are going to be more things tomorrow they are excited for, such as the Red Pants Reading Hour and the photos with the Mavs Mascots.

We also interviewed Ben, the son of the golfer Steven Alker, who says it’s a fun life being a golfer’s kid because he gets to travel around the world. He said that the kid zone was a fun place and that he has played the xbox and the video golf game. His favorite is Batman 3 on the xbox. The golf game is a little tricky to hit the ball and to see where it went but he still enjoyed it.

Our last interview was with Elan, who also said it’s a fun place to. His favorite game is the bounce house with the obstacle course. He said it’s a little hard but that he could get through it. It was great to meet kids and see how they feel about the kid zone. Everyone seems to be having a great time. We hope you can come enjoy it for yourself!