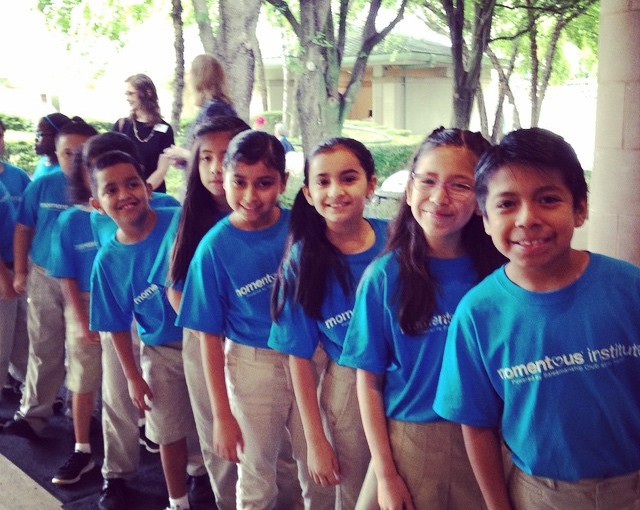 Today was my first day being a junior reporter at the Byron Nelson. It knew it was going to be an exciting day! Mr.Stewart showed me around the course and the Media Center, which is really just a tennis court that the Four Seasons transformed into the media room. You can’t tell, though, that it wasn’t always a Media Center. There are rooms sectioned off where the T.V. editing people work. Another room was the interview room where reporters get to interview the golfers. It even has a room for brain breaks, with ping pong and a mini putting green. It seems like a great headquarters for all the reporters.

When we were done setting up, we went to the opening ceremony where the 4th graders were going to sing and lots of people were going to speak. The opening started with the MacArthur High-School Junior ROTC marching to the front of the stage to present the colors and then  Nelson DeVega sang the National Anthem. He was really good! Next, lots of people talked about how the Byron Nelson was going to go and how the tournament would help Momentous Institute. My favorite part was when Jizelle and I got to go up to the microphone and ask a question to Brendon Todd. My question was “Since you won last year how do you feel about your chances winning this year” and he said ‘The weather is not the best so it might affect how I play but I been practicing’. The 4th graders closed off the opening by singing Make your Mark by Teresa Jennings. In the end it was a good opening ceremony and I had an amazing time.

After the opening ceremony we got to eat lunch. I had a sandwich with some chips and a 7 Up. Jizelle got a sandwich with lettuce and chips with a Dr. Pepper. When we were done we went to the Kidzone to see what it looked like, but it had nothing but a few tables. The volunteers said that when it is all the way set up there will be bounce houses, games and a lot more fun things to do. On our way out we went through the “behind the scenes” area where all the volunteers work. It was a huge area! It was real fun day being a junior reporter at the AT&T Byron Nelson exploring the golf course. I am looking forward to sharing my discoveries with you throughout the tournament (especially when the Kidzone is fully set up)!

When we walked into the building for the opening ceremony, we met everyone then we went over to our seats. On our chairs it had a paper that said “Reserved” with the AT&T Byron Nelson logo on it. We were in the very front row; those were amazing seats! The stage was so close to us. Ms. Peggy Nelson was there, along with Brendon Todd, Michelle Kinder, Lori Lee, David, Corrigan, Babe Laufenberg, and more. They explained how Byron Nelson started his career and how generous he was to lend his name to this tournament. Mr.Laufenberg introduced Brendon Todd to come speak after a while. Then it was our turn to ask Mr. Todd our own questions.

We walked up to the microphone and I was the first one to ask a question. I asked “What is your strategy for staying calm to make any shot?” Brendon answered with ‘I try to picture other shots I did before, then I hit the golf ball.’ Then Pablo asked his question- (I’ll let him tell you about it in his own post). Next, Babe Laufenberg put me on the spot when he said I had another question. I was so confused because I didn’t actually have another question for him. He whispered to me that it was about Tom Watson being the last person to win back to back in 1979 and 1980. Then he “asked it for me”. Brendon said he was hopeful that he would win again this year. When we were done everyone started clapping for us. It really made me feel good when Betsy Dixon (Mr. Laufenberg’s assistant) said “You two did great up there, I am proud of both of you”.

At the end of the opening ceremony the 4th graders performed a song called “Make Your Mark” by Teresa Jennings. It started out with three kids saying what they wanted to be when they grew up. Jocelyn said she wanted to be a biologist, Crystal wanted to be a teacher and Salomon said he wanted to play in the PGA golf tour. They all went in place and started singing their song and were doing little dance moves. At the end of the song they turned around to show what they wanted their future career to be. We all stood up and clapped for their performance.

The whole experience was exciting. I was kind of nervous to ask Brendon a question, but I did it! It was awesome to be in the front row. It was a great first day. I am going to have a great time all this week!