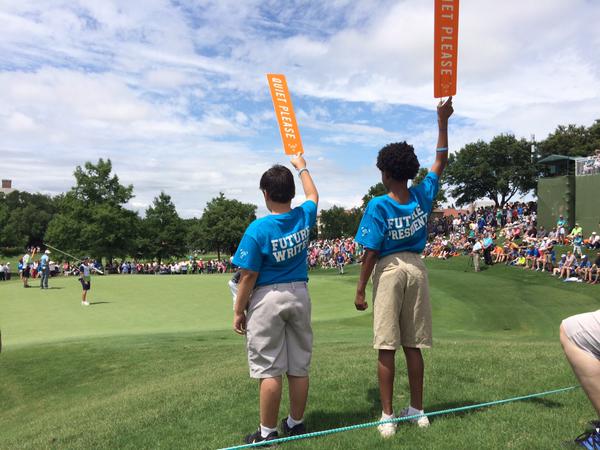 Junior Marshalls by Jizelle and Pablo

This afternoon, we interviewed Angelica, Gabby, and John Paul, three of the Momentous students who got to Junior Marshall today. Angelica said that she was nervous, but that she also felt like she had power when she was raising the “Quiet Please” sign. She said she felt bad for her classmates who had chosen not to come today because they missed out on this experience, but that they had all gotten to Junior Caddie for the Pro-Am on Wednesday, so at least they had been to the tournament. Angelica said that her favorite memory will be meeting 2011 Byron Nelson winner, Keegan Bradley, when she was a Junior Caddie. She felt like it was a privilege to guest caddie for him, and she felt lucky when he signed her golf ball. Also on Wednesday, she got to meet Max Homa at the First Tee event. When she had to putt in front of Max, she was nervous because she does not think she is very good at golf, but he was really nice and supportive. She feels lucky to be here because she knows that many students at other schools don’t get to do these kinds of things.

Gabby said she also was kind of nervous but she didn’t really think the golf ball would come near her. Like Angelica, Gabby feels lucky just to be here and have fun doing these things. Besides Junior Marshalling, Gabby sang at the Opening Ceremony. She said it was really fun and she enjoyed meeting Mrs. Nelson and all the different people who were there to support the tournament. She really liked when, after they sang, they got to eat Pizza. She said that her favorite memory will be “everything”! Both girls said that they would rate their experience at the Byron Nelson a 10.

John Paul, who also Junior Marshalled and sang at the opening ceremony wants to be a writer/reporter when he grows up. He said that, besides helping keep the people quiet, they reminded them to not take pictures, while the golfer was hitting the ball. He was helping on hole number 2 when Jordan Speith got there and that made him excited because that is who he is hoping will win the tournament. He was a little nervous when he started marshaling because he was afraid that he would mess up but when he started he relax it was easy. He also really enjoyed the Kid Zone, where he played video golf. Like the girls, John Paul is very grateful that he got to have this awesome experience at the AT&T Byron Nelson!