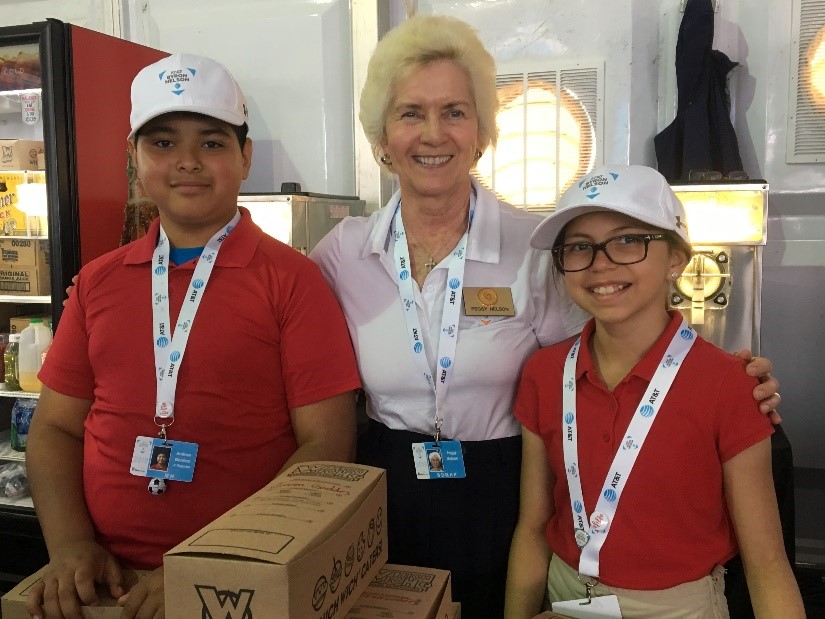 Meeting with Mrs. Nelson was a once in a lifetime experience! I didn’t know exactly what I wanted to talk about. Even though it’s called an interview, it didn’t feel like an interview.  It felt more like a friendly conversation.

Mrs. Nelson talked about how she likes coming back to volunteer at the tournament each year.  She told us about her job.  She makes sandwiches and other food for all the volunteers.

I feel like Mrs. Nelson keeps the memory of Byron alive. Me and my fellow Jr. Reporter, Emilie, asked her about her favorite memory from past years tournaments?  She told us how one year, they decided to let the volunteers make their own sandwiches on the go.  She described this as the most chaotic and craziest 45 minutes of her life.

I asked Mrs. Nelson why she keeps volunteering year after year.  Her answer reminded me of the fact that the ATTBN is more than a game. She said, “Because I’m helping.  Because my husband’s motto or inspiration was to encourage and help others.”

Talking with Mrs. Nelson was such a pleasure.  She warms up to you very quickly. She told us that the golfer most like Byron was Phil Mickelson.  Byron admired him because Phil played a different kind of game: more creative than Byron.  She said that Byron liked people who played different games.  She smiled, and said that Byron’s game could sometimes be boring to watch, while Phil’s was always creative.

It was interesting and funny that Mrs. Nelson chose someone who played the opposite of Byron, as someone who was actually most like him.  We asked why.  Her response?  “Byron recognized that there was more than one way to swing a golf club.”

This is true.  We learned that Byron never finished high school, yet he made it through life.  Mrs. Nelson keeps her husband’s memory alive, and we are lucky to have her at the tournament each year.