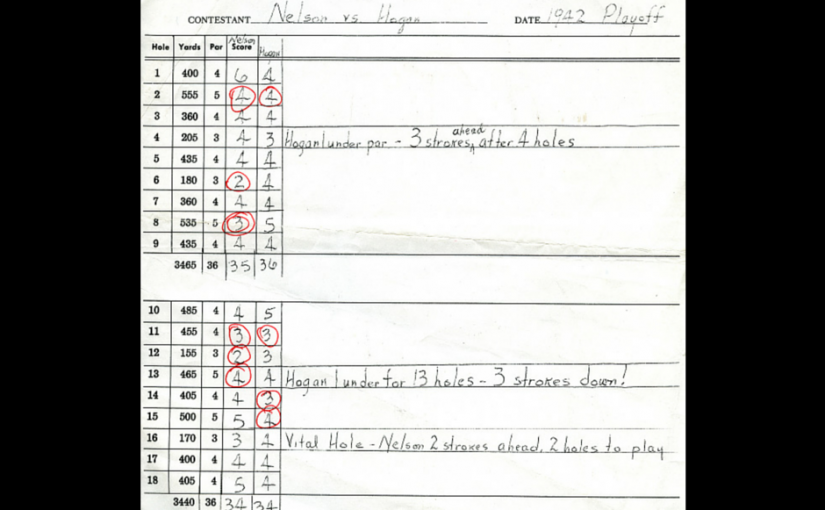 Below is an excerpt from Byron Nelson: An Autobiography. Mr. Nelson describes his 1942 Masters playoff round against Ben Hogan.

“This was probably one of the most unusual playoffs in golf, in that at least twenty-five of the pros who had played in the tournament stayed to watch us in the playoff. I don’t recall that ever happening any other time. Ben (Hogan) and I were both very flattered by that.

Flattered or not, though, I started poorly. On the first hole, I hit a bad drive into the trees and my ball ended up right next to a pine cone, which I couldn’t move because the ball would move with it. On my second shot, the ball hit more trees in front of me, so I ended up with a 6 while Ben made his par. We parred the second and the third. Then on the fourth, a long par 3, I thought the pin was cut just over the bunker, but my long iron was short and went into the bunker, so I made 4 while Ben made 3. We’d played four holes and I was 3 down.

The 5th hole had a very tough pin placement at the back of the green, but we both parred it. The par-3 6th, I began to come alive a little and put my tee shot ten feed away, while Hogan missed his to the left and made 4. I put my ten-footer in for birdie, so I caught up two shots right there.

We both parred the 7th. Next, I eagled 8 and Ben birdied, so now we were even. I picked up three more shots on the next five holes, including a shot on 12 that rimmed the hole and stopped six inches away. But Ben didn’t get rattled much. Through his tee shot stopped short of the bank, his chip almost went in for a 2.

When we arrived at the 18th tee. I was leading by 2, and Ben’s approach shot ended up way at the back of the green, with the pin way at the front. I played short of the green on purpose, not wanting to take a chance on the bunker, because in those days, a ball landing in the bunker would bury, and then you really had your hands full. But I figured I might chip up and make par, or no worse than 5, while I was pretty sure Ben couldn’t make his putt from up on the top ledge. I was right- he two-putted, I made 5 and won by one shot.

Louise (Nelson) and Valerie (Hogan) had stayed together up at the clubhouse during the playoff, and they were both very happy for me. Valerie was a very gracious lady, and Ben was always fine whether he won or lost. It was a great victory for me, and more so because I’d been able to beat Ben, who by then was getting to be a very fine player. The fact that he had come from well behind everyone else here showed that he had a lot of determination and persistence.”